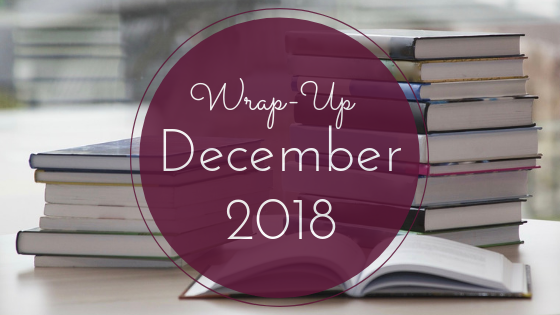 The cold weather arrived in early December. I’m so thankful for my gloves from Storiarts! They come in so handy at work when it’s a bit chilly and I need to type! 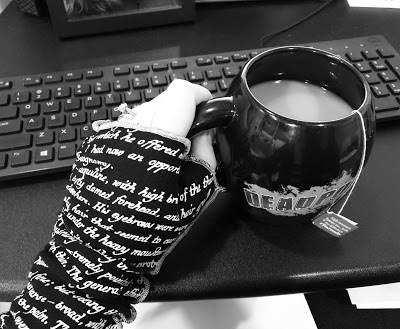 Every year, I just love seeing the holiday lights go up! This was a quick scene from downtown Manchester. I snapped the photo really quickly because it was ten degrees, very windy, and we had a couple of blocks to walk in order to meet our friends, Ross and Taylor, for dinner. 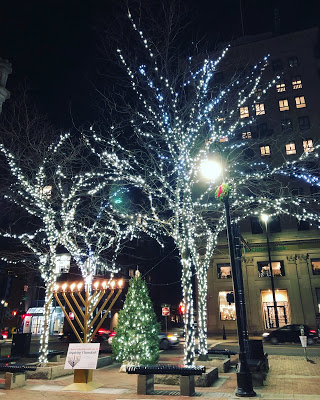 This month was filled with holiday parties! The first was on the 1st of the month and we had so much fun! The second one was on the 8th, and that was a lovely time as well. 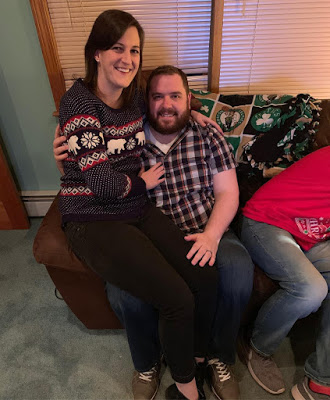 Next up was my first company party with CCA and it was AMAZING. The decor was lovely, the food was delicious, the band was great, the photo booth was fun, and there were two free drinks for each person! I was thrilled because this event was held at one of my favorite places, LaBelle Winery! My boss even got up and sang a hysterical rendition of Baby It’s Cold Outside with another woman from the office. 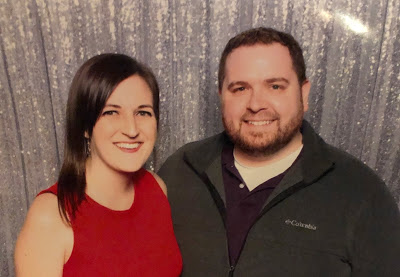 When we went to leave, we were given a beautiful rose that the owner had purchased for each employee. How thoughtful!? 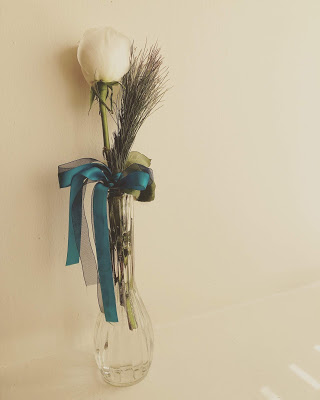 Next up was a gender reveal party for our friends. We cannot wait to meet the baby next year! 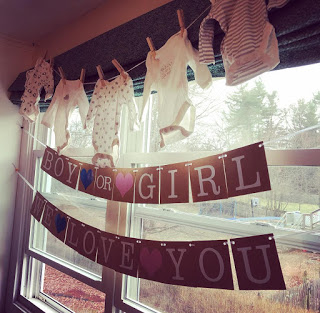 Toward the end of the month, the holidays were in full swing! Alex and I traveled back to my hometown for Cookie Day and to celebrate the holidays with my family. 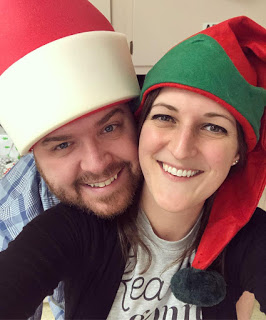 Alex made just one cookie, Boo (the ghost) from Mario and then he helped me frost a few of mine. I was attempting to make snow globes. But as you can see below, they didn’t go exactly as planned. 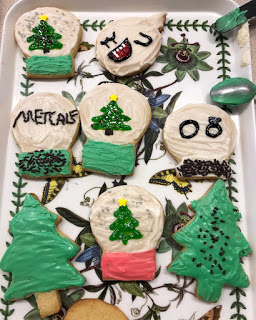 Next up was Christmas Eve where Alex and I exchanged gifts and Christmas Day, which Alex and I spent with his family. 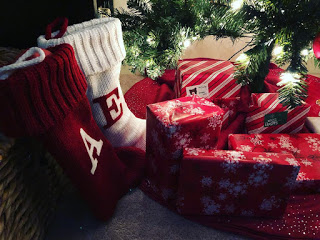 This month, I also had a wonderful photo shoot with a local family. I just love shoots with this crew, they’re always so fun! 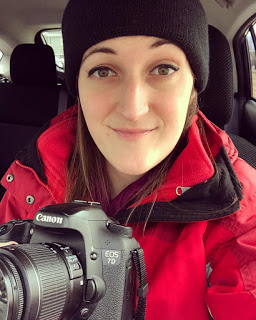 Lastly, we rang in the new year with our friends The Gaw. It was a wonderfully low-key night.

My Reading Breakdown for December:

Watching:
Gone (2012 Film)
I have to say, while the beginning did build up to the action pretty nicely, the first half of this movie was so boring to me. The main character spent a lot of time walking, running, or driving around. The ending was worth the slow build up though and this film had a great cast! I definitely recommend giving this a watch. 3/5

Anna, also known as Mindscape (2013 Film)
This was another slow moving film, but the storyline was so interesting and suspenseful! And then when the reveal occurred… I totally didn’t see it coming! I definitely recommend this one! 4/5

Smiley (2012 Film)
THE ENDING OF THIS ONE. Oh my gosh. I shouted a, “Oh what..!” Followed very quickly by a, “WAIT WHAT?!” I definitely recommend giving this one a watch! It just isn’t one I would watch again personally. 4/5

Island Zero (2016 Film)
Well, that was a thing I watched. It was SO cool to see some of the scenes filmed in my hometown. But that’s about where my excitement ended. The story could have been pretty chilling, but the CGI was horrible and the acting wasn’t great. 2/5
Wicked Little Things (2006 Film)
Oh my goodness this one was creepy! They did a wonderful job making this dark and suspenseful. There were a few silly moments, like many horror films… There was one scene that was really bad, but it happened quickly and then we moved on; it was when the mom was running through the woods. She ran through a spiderweb and there was a fake spider in the web that landed on her face. They should have left the spider out! It just looked so lame. But overall, this film was awesome! Chloë Grace Moretz did an amazing job and the children were terrifying! When the children were eating, I actually had to look away because it made me queasy.  4/5

A Midwinter’s Tale Episode of Sabrina (2018)
This was a fun little additional episode! There was a bit too much happening, so it felt rather scattered to me, but it was still interesting to watch. 3/5

Bird Box (2018 Netflix Film)
SO GOOD. I loved this adaptation! Of course, it was slightly different from the book, but it captured the overall tone and horror so wonderfully! I already cannot wait to watch this again. What a great cast and of course Sandra Bullock did an amazing job! Check out my full review here. 5/5


A Christmas Prince: The Royal Wedding (2018 Netflix Film)
I was so excited when I saw this on Netflix! I loved A Christmas Prince and couldn’t wait to watch this follow-up film! I gotta admit though, it gave me some flashbacks to our own wedding planning…

The Holiday Calendar (2018 Film)
This was super cute! Very predictable, but still fun! The end made me tear up! 4/5

Super Troopers 2
I cannot believe it took me this long to watch this film! It was so much fun seeing this crazy crew on screen again! 4/5

Playing:
Last month, Alex and I went to hang out with our friends Matt and Megan and Matt told me about this game that Megan was hooked on. I had been drinking some wine… so I may have bought a couple of the games and then totally forgot about it until I saw the icons on the second screen of my phone. Oops! But I finally gave the game a go, and I am OBSESSED. If you enjoy puzzles games, I highly recommend this one! 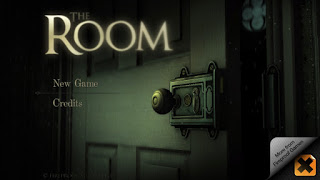 Drinking:
This month I had quite a few Cranberry Mules! Those drinks are just so delicious!
When we visited my mom and step dad, my step dad poured my mom and I some delicious Prosecco! 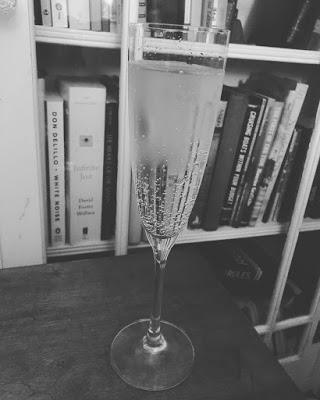 My step dad also gave me a delicious cup of tea the next morning! I loved it so much that they ended up sending it to me through the mail! 🙂 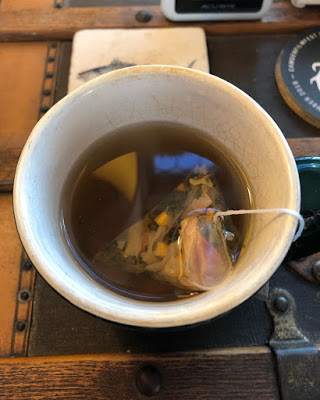 And then just because I enjoy this photo that I took, I had to also share this one: 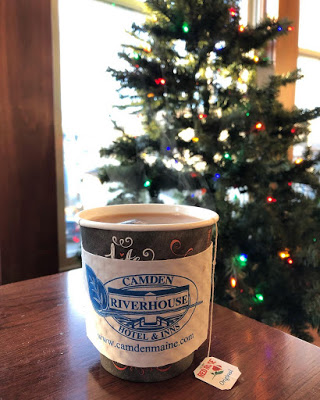 Also this month, Alex and I went to hang out with our friends Rob and Amber, and they took us to a new spot in Nashua called Liquid Riot where I got a flight, but only tried two of the brews and gave the other two to Alex. I really enjoyed the space, but the food was not good (hopefully they will work on their menu; I have hope for them! They just recently opened), and the beer was okay. I’d definitely be interesting in seeing how often they swap out their beer options. 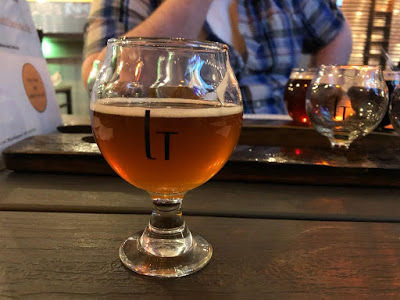 After our stop there, we just had to go to our favorite place, Flight Center, to get the delicious truffle tots. I also got another flight where I discovered a new favorite beer! 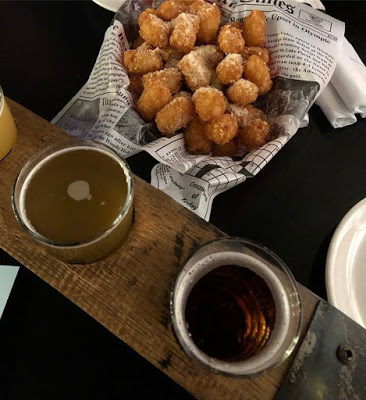 Listening to:
On our drive to and from Maine for the holidays, my husband and I listened to the entire set of Bear Brook podcast episodes. What a terrifying story, and it happened so close to where we live! If you’re into True Crime, I highly recommend this podcast!
I snagged two audiobooks from audible this month, each of which were perfect for the holidays:
I’m not sure if I have mentioned this on my blog before… But I listen to My Favorite Murder just as soon as they release a new episode! This month, I bought myself a little treat in celebration of buying my car: 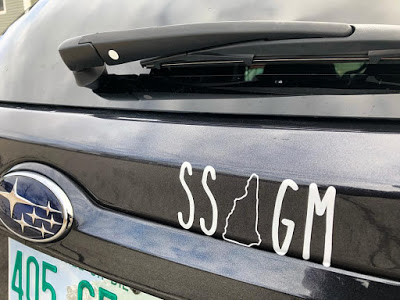 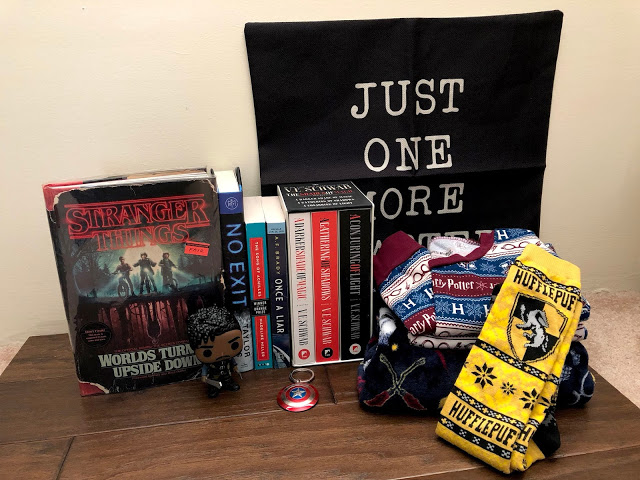 Book of the Month:
This month I snagged No Exit by Taylor Adams. I cannot wait to read it! Unfortunately I just didn’t have time to get to it this month.
Book Club:
We didn’t have book club this month because the holidays were just too crazy for everyone.
My favorite bookish photo this month: 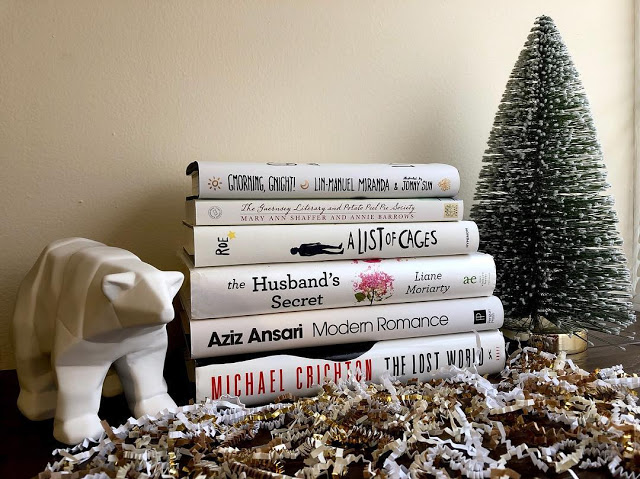 Looking forward to:
In January I’m going to see Panic at the Disco again!! I cannot wait! I saw them twice when I was still in high school, and while it’s not the same crew, I’m still so pumped.
Also in January, I will be heading to DC for work. I’ve never been and I’m a bit nervous to travel during the winter, but I’m definitely looking forward to getting my second work convention in the books. I just wish there would be more time to explore the city.

Thanks for reading!
How was your month? Have any special plans for January? I’d love to hear about them in the comments section below!