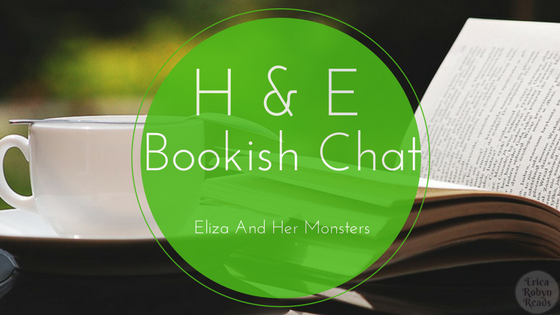 Heather (of Heather’s Reading Hideaway) and I recently buddy-read Eliza And Her Monsters by Francesca Zappia. After messaging one another to say that we had each completed the book, this happened:

H: I’m not even sure how to review this book. I immediately revert into caveman Heather, “IT GOOD. READ. NOW.”

Needless to say, we agreed that this would be the perfect book to roll out an idea we have had for a while now; H & E Bookish Chats!

But first, if you missed either of our reviews, feel free to check them out by clicking below:

THERE WILL BE SPOILERS IN THIS CHAT.
Please do not continue on if you have not yet read this book.

This is part one of our discussion. At the end of this post I will link you to part two 🙂

Now, let’s jump into the discussion!

Discussion of Eliza And Her Monsters

E: One of my favorite aspects of this book was the dynamics between the online friends. It was so realistic and so well done! You really felt like you were in the chat with them.

H: Yes! We may know each other IRL, but we are mostly online friends. I think I saw pieces of our conversations and day to day jokes in the conversations Eliza had with Em and Max!

E: Oh for sure! Especially the bit where Em was typing in all caps, “yelling” at Eliza to hurry up and get online so she could answer her.

H: Yeah! I think I related to when Eliza mentioned that she could log online and it didn’t matter how long it had been since they last talked. It was like there wasn’t a gap of time at all. Things flowed naturally despite the time difference, age, or location. I also liked that Eliza knew something was up with Max just by the way he was typing. Our generation and younger have gotten so good at reading between the lines through text. I know from the way you’re typing if something is up.

E: Definitely! It’s so crazy. Of course things can go the other way too, and people can think someone is using a tone when they really weren’t. There’s a great skit about that… I’ll link to it here if I can find it (the video is below this paragraph). But generally I totally agree that our generation is really great about picking up on hidden tones and such. And the whole picking up right where you left off thing is so great. I have so many friends that are all across the country, and I talk to many on a daily basis. It’s so refreshing to just dive into a conversation, hardly ever using any pleasantries. Most of the time it’s just like, “OMG I want all of these purses, which one should I actually buy?” Or “YOU NEED THIS” with a photo of some random tea-related item.

H: Exactly! I love that we talk daily but even if we didn’t and there are times where days go by because life gets in the way. It’s comforting to get a random “OMG look at this funny picture of a corgi or pug!” message to get in the middle of the day. It reminds you that even if you’re having a bad day or something is eating at you, there are people online who are thinking about you.

E: Definitely! So another thing that I absolutely adored about this book was the transformation of Eliza’s brother, Sully. He was such a stereotypical bratty younger brother that was polar opposite of his sister. But when she really needed someone there for her, he stepped up to the plate. I thought this was an incredible show of how siblings mature together.

H: Yes! Because I am a giant baby, I teared up in the scene where Eliza is curled up watching Dog Days and her brothers are there with a giant bowl of hard boiled eggs. I loved that the boys (Sully especially) stepped up and reminded Eliza that she has people in her physical life that are there for her when she needs it. Especially during a time in her life where she was feeling the most lonely. With Wallace not talking and Em and Max being mostly silent online. I also really liked that the brothers were reading Monstrous Sea the entire time and they loved it! They understood it, and they explained it to their parents and I found that to be so great. It showed that this was a generation thing but also that Eliza had her own little fan club in her house and didn’t even know it,

E: Oh my gosh, yeah! That scene with the eggs got me too. It was hinted that the three siblings had better relationships after that, but I wish we had gotten to see a little more of it. I think that could have been a really strong element to the story, but it also may have taken away from the overall plot I suppose.

H: True! I wish we had gotten more of Eliza patching things up with her family, but I think what kind of satisfied that for me was the scene where they (Eliza, Wallace, and her family) are all outside playing some sport together! I think, because Eliza is still just a kid, she was selfish to be angry that her family (so she thought – since we learn her brothers did care) didn’t care about Monstrous Sea. But she didn’t try to put any effort in the things they wanted to do. In that one scene with them playing outside it showed that Eliza was growing too.

E: Me too! I did love that scene as well, and it seemed like they were definitely all a bit closer with how the brothers cheered when they saw her walking by. And that is a great point about Eliza not making an effort with her parent’s interests. That kind of thing most definitely goes both ways. Of course, as an angsty teen, it can be very difficult to see it that way.

H: Right! I mean we’re both in our mid twenties (gah!) and so I think we are mature enough to see Eliza’s attitude as both bratty and concerning especially when it comes to her obviously needing some help for her anxiety.

E: So the one con that I struggled with was the predictability of the book. Of course, we’re not exactly “target audience” for this type of book (and of course I put that in quotes because I’m totally not into YA being JUST for teens, like seriously what kind of garbage statement is that?! lol). I think I definitely would have found it less predictable if I had read this when I was a teenager. That being said, I didn’t think this took away from the storyline at all! I still really loved it.

H: Yes! I don’t think it took away from the story either. But I did see where it was going, and it was fairly predictable overall. Even with Eliza contacting the author of Children of Hypno. I had a feeling something like that would happen because I had a feeling Eliza was going to have issues with finishing Monstrous Sea. I think that predictability is okay as long as it’s done well, which it was. And I agree about YA not being only for teens. I think that’s a narrow way of thinking, especially since there are many mature stories in YA. This being one!

You have now concluded my side of this chat, click here to continue on over at Heather’s Reading Hideaway!