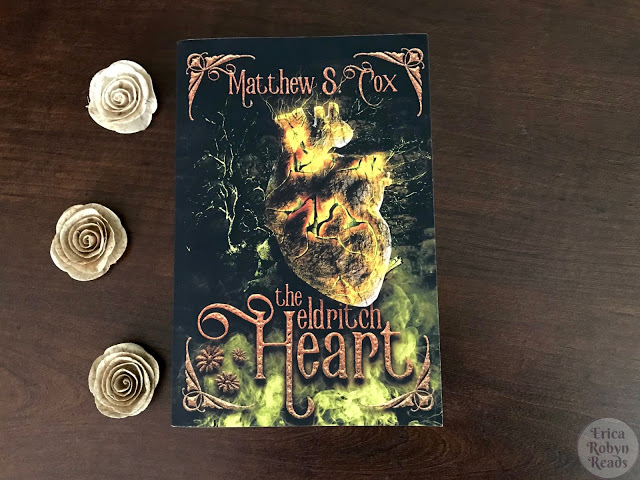 The Eldritch Heart by Matthew S. Cox is a cute love story that is packed with action from cover to cover! If you’re looking for a great YA Fantasy where the princess acts as the stone that bends the river, and fights against outdated beliefs, then this is the right book for you!

Full disclosure: I was given a free copy of this book by the author in exchange for an honest review. This did not affect my rating in any way.

Synopsis:
Princess Oona Talomir enjoys the little things that come with her station: a handmaiden, her lavish bedchamber, and scores of fancy dresses―the duty to win a decades’ long war, not so much.


Oh, did I mention assassins?


Seers foretold the conflict would end by her hand. From the moment she drew her first breath, the neighboring kingdom has been trying to kill her so she could not grow powerful enough to destroy them. The king, fearing for his daughter’s life, has kept her confined to the castle grounds for most of her sixteen years. With the tide of war turning against them, the burden of her crown becomes too much to bear, yet one thing lifts her spirits amid the gloom.


Alas, in a kingdom obsessed with the god of purity, she is terrified to confess her forbidden love. When her father makes a demand she cannot abide―marry a prince to forge a military alliance―Oona panics. He is handsome and honorable, but he’s not Kitlyn. Unable to admit why she cannot obey, Oona does the only thing she can think of, and runs away.


Alone and unprepared in the wilderness, she prays the gods will let Kitlyn find her—before the assassins do.

My thoughts:
First things first… LOOK AT THAT COVER. My goodness, I love it so much! The cover was designed by Eugene Teplitsky and it’s a design that fits the book wonderfully in my opinion. When I read the description of the heart for the first time in the text, I immediately looked back at the cover and thought, “The designer must have actually read the book and really paid attention!” Far too many times, especially with fantasy books, I’ve found that the covers just don’t align with the text. This one was spot on!

Matthew told me he’s about to drop a new cover design. I can’t wait to see it! Once that has been released, I will make sure to add it in here! *UPDATE* Check out the new cover here!

So now about the heart of the book! The writing style was very easy to read and it all flowed well. There were so many passages that I absolutely loved (see “My favorite passages” below!). And like I said above, it was so action packed! Just when I thought things were going to calm down a bit, the girls were thrown into another crazy situation.

I really enjoyed Kitlyn as a character! Right from the first chapter, I was drawn to her. Even with everything that was thrown her way on a daily basis, she stayed so strong. I also really loved the character Ralen. I would have happily read more about him, though I am glad that he didn’t overshadow Kitlyn and Oona. I also really enjoyed many of the side characters such as Kethaba, Beredwyn, Ogun, and Evie.

Thinking about Kitlyn and Oona together as a duo, I did really enjoy their wit and tenacity!

There were SO many elements in this book that are very relevant to the state of the world today that Matthew covered wonderfully! The two that really stood out included:

Beware, the slight negatives:
There were two things that kind of took me out of the story a bit. I’ve been mulling these two things over and I think it’s simply because I’ve grown out of this genre; I don’t think these things would have even phased me if I had read this book when I was a teenager. I used to LOVE YA Fantasy, but now the ones I enjoy are very few and far between. And don’t get me wrong, I still really enjoyed this one!

The first slight negative for me was how repetitive it was. I started to lose interest in the romance and the relationship between the girls and the king because of how often certain things were brought up. At first I was okay with the repetition! For example, when Oona thought about something, I like that we also saw Kitlyn thinking the same thing before the tension was resolved. But after awhile, it became bothersome to me (which, of course, is my usual irk with many books).

And this makes me so sad, but I have to say that I really didn’t like Oona. I really wanted to see her grow up! Things toward the end seemed to be improving, but it was too late for me to jump on board. But to avoid spoilers, I’ll leave it at that.

My favorite passages:
Kitlyn covered her mouth in a poor attempt to mute her laughter and reached to help her up. The princess clasped her hand, setting off a sensation like a mass of exuberant fireflies swarmed around her arm and settled in the pit of her stomach.

“Argh!” She screamed. “I feel like one of those nutters they confine in… in…” She huffed, the sharp breath tossing a frappe of her hair off her face. “Straightjackets.” Grunting, she pulled, and another bow came loose. “When I am queen, I shall outlaw any garment one cannot put on or take off themselves!”

“Tenebrae’s teacups!” Oona’s hand sprang open as a reflex, dropping the bade. She clutched her fist to her chest, gasping from the pain.
The guards relaxed all at once. Usually, that epithet invoked the death goddess’ bosom rather than her tableware… and did not belong coming out of a princess’ mouth.

By late afternoon, the growling in her belly had grown loud enough to have a conversation with, not that she could understand a word.

The old one pursed her lips. “Oh, and we don’t eat babies, either.”
Kitlyn blinked.
“They’re too difficult to prepare. Tiny bones, you see.”
She dropped the spoon in the bowl, horrified.
Kethaba burst into laughter. “Oh, forgive me, child. The look on your face…” She cackled.

She’d felt like a mouse in a barn full of wildcats before, but now the barn happened to be on fire too – and locked.

No words came to mind to fit the weight in her heart, or the sorrow on his face, so she kept quiet. Long meadow grass on both sides of the road wavered in the wind like waves upon the ocean.

Pure panic gave her wings, and she somehow managed to bounce out of it onto her feet.

She drew in a breath to do what any self-respecting sixteen-year-old princess with a meager longsword would do when finding herself ten paces away from such a thing: she screamed.

My final thoughts:
I would absolutely recommend this to fans of YA Fantasy! This story was so refreshing when comparing it to other YA Fantasy novels I have read. There were so many bits of this book that made me gasp or laugh right out loud! I can’t wait to read more by Matthew S. Cox!

Thanks for reading!
My copy of the book is now on it’s way to a friend that I know will just adore this book! Stay tuned to Heather’s Reading Hideaway to see if I was right! 🙂

And to learn more about Matthew S. Cox, visit his website here!
SaveSave