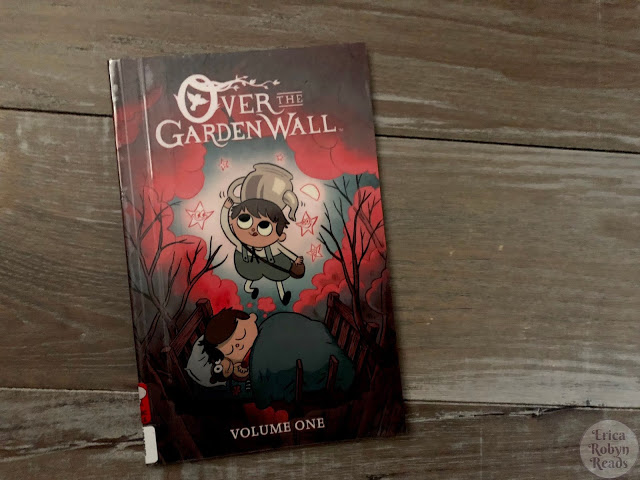 Over The Garden Wall Vol. 1 by Jim Campbell, Amalia Levari, & Pat McHale is a cute middle grade graphic novel. While I enjoyed the read, I felt a bit like I was picking up a book in the middle of a series…

Over The Garden Wall Vol. 1

Synopsis:
Two lost brothers venture across a strange forest and discover incredible and bizarre things on their journey home in a style reminiscent of The Wind in the Willows and Sleepy Hollow.

Return to the Unknown with new Over The Garden Wall stories that expand the world of the Emmy Award-winning Cartoon Network series.

Writer and artist Jim Campbell spins a tale that follows Greg and Jason Funderburker as they traverse the Unknown and find new friends along the way. Meanwhile, the Woodsman’s daughter Anna, wanders alone in the Unknown after her father is tricked by the Beast.

Written by Amalia Levari with artist Cara McGee—find out how Anna learned to survive on her own as she starts her journey to save her father before his fate is sealed. Both of these stories are something no Over The Garden fan will want to miss!

My thoughts:
Here’s my break down for each of the two stories included in this volume:

Dreamland Melodies
The artwork overall was interesting in this story. The facial expressions of the characters had me cracking up! That was definitely my favorite element. 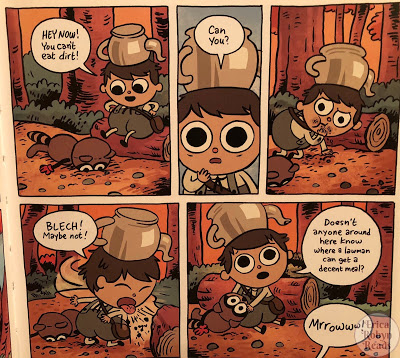 Greg, the main character, was pretty funny! I loved how he related every situation to a case that needed to be solved!

Robber Raccoon was adorable. I love that the main character named him this and constantly kept a close eye on him as he was supposed to be in the hands of the law.

I loved the frog, Sheriff Funderberker. Throughout the story, he was guiding Greg along. Seeing the frogs facial expression on each panel was too funny! In one instance he even broke with fourth wall and looked at the audience like, “oh here we go…” 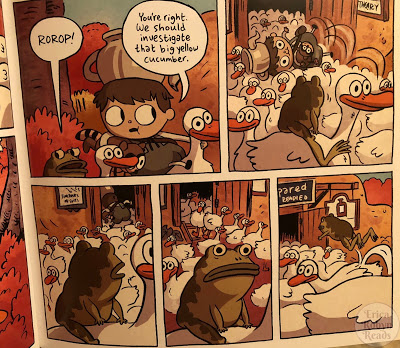 The story flowed very quickly, jumping from situation to situation after only a few pages. We saw a giant cat that just wanted a treat, an anxious squirrel, a mole village, dozens of ducks, a witch, and a beaver with a haunting problem… In each situation, Greg was on the case! I loved how nothing seemed to phase him; he just looked at the situation and solved the issue, whether by accident or by thinking it through.

Homeland
This one was very confusing to me at first… All I understood was that the main character was named Anna, her mother has passed on, her father is lost, and that there is a beast out in the woods.

One element of this story that I did like was that one day Anna makes a list of rules. One rule on that list was, “I must not smash crockery in vexation.” And then below that “(Especially that last one)”. I chuckled at this because on the second page, she had smashed a mug.

Later, Anna smashes another mug and in the next scene when you see the list of rules, “I must not smash crockery in vexation” is crossed out.

My final thoughts:
I enjoyed the first story, Dreamland Melodies but Homeland was a bit of a miss for me.

Like I mentioned at the beginning of this post, it really felt like I was missing something with both of these stories… It was like I jumped into the series in the middle of things. Perhaps I should have watched the TV show first? I’m not sure.

I have already checked out Volume Two from the library, so I will be reading that next. We’ll see how it goes!

Thanks for reading!
Have you read this series or watched the TV show yet? If so, what did you think? Is it necessary to watch the TV show first?