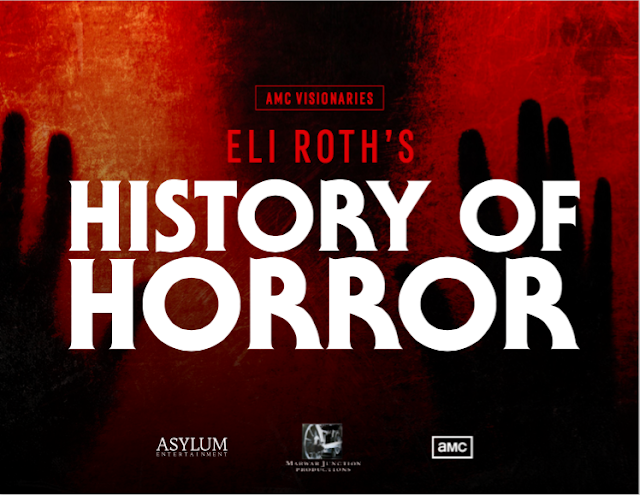 When I first heard about this show, I could not wait to watch! Unfortunately, it aired late at night, and with work beginning at 7 am for me, I just couldn’t stay up late enough to watch it.

When I saw that all of the episodes were available on demand, I dove right in!

This show was so wonderfully put together! Each episode had a central theme and it was organized in a way that mixed interviews from various people with stills and clips from various films! There was such a great variety of people that were pulled in; directors, writers, actors, researchers, creators, special effects artists, makeup artists, film critics, authors, producers, directors of photography, composers, film editors, et cetera, each of whom added so much to the series!

I loved how the series pulled in individuals that worked on the specific film that they were discussing on that specific episode along with other writers, actors, creators, and others, as they discussed the work itself, what it meant to horror in general, and what it meant to them specifically.

A few of the people that were included that I was psyched to see were Greg Nicotero, Norman Reedus, Rob Zombie, Chris Hardwick, Stephen King, Elijah Wood, Joe Hill, Jack Black, Tobin Bell, and Slash, but there were so many others!

Below, I have written up a quick breakdown of each episode:

Episode 1: Zombies
I was so excited to see that the first episode of this series was about zombies! I’m a total sucker for anything zombie related!

Of course, with its current popularity, the episode kicked off with a great feature on The Walking Dead with interviews with individuals such as Greg Nicotero, Norman Reedus, and Chris Hardwick. The narration then moves on to the classic, Night of the Living Dead, where Stephen King discussed what watching this film was like when it first came out. The narration also dives into discussions about the progression of the zombie over the years, with another great feature on Shaun of the Dead! Later on, the show loops back to The Walking Dead before it concludes.

I loved watching the progression of zombies throughout the history of film and how certain films and the work on those films really paved the way for the shows and films of today.

This episode also brought up an interesting question! Are you a slow zombie fan or a fast zombie fan? I’m definitely both! I find them both incredibly terrifying.

Episode 2: Slashers Part 1
Phew, the opening sequence for this one really kicked things off in a bloody manner! I loved that they discussed that Halloween was the film that made the final girl trope really popular. That’s a trope that I am certainly a fan of!

Of course there were features in this episode for Halloween, Psycho, Texas Chainsaw Massacre, Friday the 13th, Maniac, and Child’s Play.

Another great section of this episode discussed how many people protested these types of films because they were seen as “misogynistic,” that they were simply about violence against women. This is a topic that has really frustrated me with books and films in the horror genre. So I was thrilled to see that this was discussed. The best line that summed up my feelings about this was when author Kier-La Janisse said, “Usually it’s the people that don’t know anything about the topic that are the loudest complainers about it.” *mic drop*

Episode 3: Slashers Part 2
This episode dives right in with a feature on Friday the 13th and discusses how this blend of slasher and the supernatural took horror in a new direction. Next up was a feature on Candyman, followed by a feature on Scream, and then The Silence of the Lambs. After that, there was a feature on one of my all time favorites, Saw. Gosh, how insane that first film is still blows my mind!

Episode 4: The Demons Inside
Possession films are usually a hit for me! There have been a few I’ve watched that I didn’t much care for, but that’s usually the case with most things.

This episode featured The Exorcist first. I couldn’t believe it when the actress, Linda Blair, talked about the scene where she was sitting up and down on the bed really quickly and how to make that scene, she was strapped into a metal brace. But because she wasn’t strapped in very well, the brace ended up fracturing her spine, which was where a lot of the screaming came from in the film…

Other features included Paranormal Activity, Jennifer’s Body, and Rosemary’s Baby, three films that I haven’t watched because I’m too worried the found footage style would make me too sick, I’m not a huge fan of Megan Fox, and I just don’t think the third film would interest me much.

Other films that were featured that I was thrilled to learn more about were The Evil Dead and The Omen! I could swear I’ve seen these film, but I can’t remember much about them. So this calls for a re-watch!

The episode concluded with a discussion about Get Out.

Episode 5: Killer Creatures
I LOVED this episode! I really enjoy when there are creatures involved in a horror story! It’s so creepy and even the ones that aren’t done very well have a creep factor of their own!

The episode began with a feature on the latest IT film. My goodness that opening scene with Georgie and his boat… Next up were features on Gremlins and The Thing. Then the episode dives into man vs nature, where the first two features were The Birds, followed by Cujo!

When discussing Cujo, the main actor discussed how hard acting for that movie was and that she was treated her for exhaustion for three weeks afterwards. I also loved learning that while filming, they had to tie down the dogs tails because they were very happy to go after their toys while the crew was making it look like they were attacking!

Then of course, there was a great feature on Jaws that made me want to re-watch the film immediately! And then the show moved on to discuss werewolves, focusing in on The Wolf Man and how that film influenced The Howling and An American Werewolf in London.

The episode concluded with short features on The Shape of Water and Pans Labyrinth.

Episode 6: Vampires
This episode was my least favorite out of the first season, but it was still fun to watch.

The episode began with a discussion on the character, Dracula, of course. The majority of the discussion throughout was focused mainly on sexuality and violence and how the two are perfectly merged in many vampire tales. It was also about the social elements that the shows or films brought to light in their scripts.

Of course, this episode took a turn from horror to the sparkling vampires of Twilight… but soon enough we dove back into the horror!

This episode featured Poltergeist, Insidious, The Shining, The Haunting, Sixth Sense, The Changling, Crimson Peak, The Ring, and others.

When discussing Insidious, there was a great interview with the composer who talked about how he found an old piano rotting behind a recording studio. He went to check it out and was pleased to see that when he hit the keys, it had a very unique sound. He used the sounds from this piano for a lot of the sounds in the film!

Thanks for reading!
If you’re a horror fan, I highly recommend checking this series out! I hope the create a second season soon!