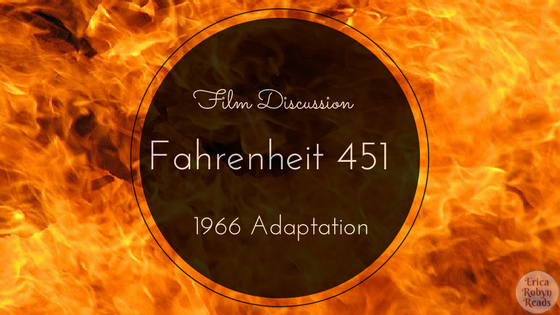 Fahrenheit 451 is one of my favorite classics! When I realized that I hadn’t yet seen the 1966 film, I immediately requested it from Netflix.

Feel free to click the corresponding links if you missed my reviews for the novel or the graphic novel.

NOTE: THERE WILL BE SPOILERS.

So if you haven’t watched the movie or read the book, please proceed with caution. 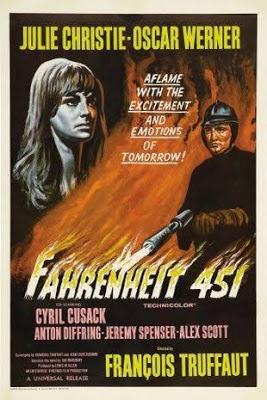 Discussion of the Film Adaptation of Fahrenheit 451 (1966)

My thoughts:
The opening sequence doesn’t have words, like a typical film does. Instead, there is a narrator stating the info to the viewers. At first I took note of this, but didn’t think much of it. But I later learned that this was a Truffaut feature that was done purposefully, so when you see the first printed word in the movie, it is a special moment.

Montag meets Clarisse while on the train rather than in the street. She said they commute together everyday and rather than being a teenager, she says she is twenty. One line that really stuck out was when she asked Montag what his wife is like. He says “She is quite like you, but her hair is longer.” Turns out, the actor Julie Christie plays both Clarisse and Linda Montag.

I really liked that Clarisse asked about the numbers the firemen all wear, and Montag explains that it is the temperature in which book paper burns.

Watching the firemen go UP the fire pole looked great for an older film! Turns out it was filmed normally but then reversed. What a clever idea!! Later on, when Montag begins sneaking books, the fire pole stops working for him. I thought this was clever, though I do wish we had seen The Hound!

I liked the added element of Montag teaching a class of young men at the firehouse. He goes over how books have been hidden and how to search properly which added depth to the film.

The scene with the firemen raiding the woman’s house was so well done! I loved the homes secret library. But my gosh, watching them toss all the books to the first landing or shoving them off the shelves was painful.

While there were a great number of changes, I still think this was a pretty good adaptation! Here are some more of the changes that I noted but didn’t really care for:

Rather than burning the books right in the house, the firemen brought the books outside and set up a metal contraption to burn them on. Then one man would put on a special suit and use the flamethrower. Only when the entire house was condemned did they burn everything.

One of the largest changes was that the burning all occurred during the day. Which I am assuming was for filming sake, because in the book they only burned at night.

Clarisse has a much bigger role in the film than in the book. She’s the one that calls the Fire House to tell them Montag is sick and will not be coming in to work that night. Clarisse also lives in a lovely house, and Montag lives further down the street in a complex of houses that all look the same, rather than being next door neighbors.

Rather than having entire walls where Linda watches her shows, in the film there are special television sets.

Linda is much more upbeat in the film that in the book. In the film you see Linda put a name in the information box. I didn’t like this change. I much preferred bring kept in the dark regarding Montag’s situation.

At Montag’s house, Beatty pulled a gun on Montag. I didn’t really care for this change either. Especially because he could have still fired the gun after Montag hit him with the flamethrower.

The escape sequence was interesting. Rather than just using helicopters, the men were using some kind of personal hover device. The only helicopter included was the one use to shoot at “Montag.” And rather than going into the water, Montag used a boat.

There were no atomic bombs, so we didn’t see the fallout at the end of the film.

My final thoughts:
While I did enjoy the film, it certainly wasn’t my favorite adaptation because there were a great number of differences. As a film alone, however, I think it did a lovely job even though some of the acting was pretty awkward to watch. My favorite element of the film was that the expressions of the actors led the story many times.

One last note, I highly recommend watching the bonus features at the end of the film! There were SO many elements that I missed in my first watch. Whether it was a quick nod to Hitchcock that you could miss if you blinked, or something more prominent like the book by Adolf Hitler that was passed off with a specific quote, I love when filmmakers do things like that!

Thanks for reading!
Have you both read the book and seen this film? If so, what did you think?