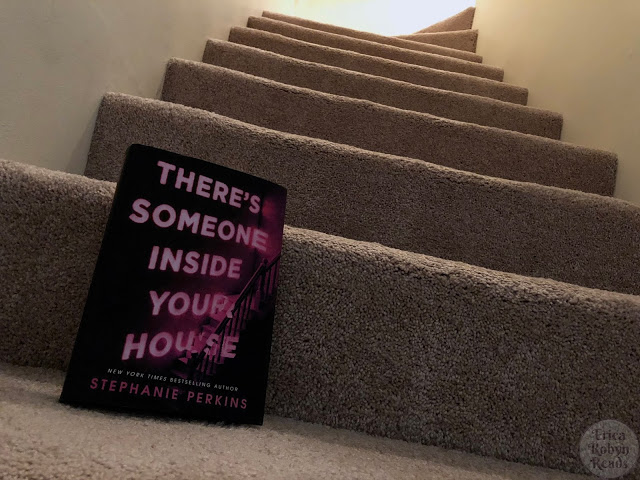 Shout-out to the wonderful Paula, admin of the Facebook group Bookaholics, for sending me a copy of this book!

There’s Someone Inside Your House by Stephanie Perkins

Makani Young thought she’d left her dark past behind her in Hawaii, settling in with her grandmother in landlocked Nebraska. She’s found new friends and has even started to fall for mysterious outsider Ollie Larsson. But her past isn’t far behind.

Then, one by one, the students of Osborne Hugh begin to die in a series of gruesome murders, each with increasingly grotesque flair. As the terror grows closer and her feelings for Ollie intensify, Makani is forced to confront her own dark secrets.

My thoughts:
Whenever I see a book labeled YA Horror, I’m always a bit hesitant. However, with this book… it had way more gore than I was expecting! Phew! Many of the descriptions were actually quite brutal! I enjoyed seeing how each victim was left after the killer was done with them, as dark as that sounds! Yikes! But it just showed how much thought went into each killing, even though from the outside, each attack seemed so random.

The overall premise also really creeped me out. I don’t want to give anything away about that aspect, but I will say that it had a bit of the Golden State Killer feel to it… and not going to lie, I totally lost sleep overthinking this book one night when I had been up late reading!

I didn’t love the characters, but I did find them interesting. I wish Makani had been just a little less selfish, but it did work with her teenage persona!

Beware, the negatives:
My main irk was about the massive build up for Makani’s big secret. This was hinted at so frequently that I thought it was going to be something really intense. But I have to say, the reveal was a bit of a let down.

There was quite a bit of repetitiveness, but that was mainly in regard to Makani’s big secret, her fearful thoughts, and the POV’s overlap every now and again.

I also didn’t super care for the romance, but of course, with YA there just has to be an angsty, miscommunication-filled romance. I will say that it wasn’t too overdone, however, and it did really work well with the story overall.

The ending… I was enjoying how quickly everything was happening. I felt like I was totally caught up in a whirlwind of suspense and gore, but then I turned the page fully expecting to see more, but there wasn’t anything there… It was just too abrupt for me.

My favorite passages:
The thought churned inside Makani’s stomach like a rotten apple.

They talked for hours. Until Makani’s hands were cramped from gripping her phone and even the singing crickets had gone to bed.

Makani peered over her grandmother’s shoulder and out the large window that looked across their front lawn. She scanned the yards for the boogeyman, the Babadook, Ted Bundy. The street was empty.

Her attacker – it was intolerable for her to think his name right now – had reduced her to a child afraid of the dark. She wanted her stuffed animals. Perhaps they could have kept her tethered to these more simple fears as opposed to her current reality.

It felt chillingly empty without the tick of the grandfather clock. The heart of the house was dead.

My final thoughts:
Overall, this book really creeped me out! I loved how terrifying it was as the characters tried to figured out the killer’s motive. Equally terrifying was how the killer moved around and what he did before he killed; that bit scared me the most!

However, I could have done without a lot of the elements that put this book firmly into the YA genre. Even so, this was still a great read! I would definitely recommend it if you’re a fan of YA Horror with quite a bit of gore.

Thanks for reading!
What was the last horror book you read?