The Last Time I Lied by Riley Sager is an intense thriller that will keep you totally immersed while it continuously throws you for a loop! Just when you think you know what’s going on, something else will happen that you did not see coming.

Pick this one up on a day off. You won’t be able to put it down!

I so incredibly thankful to have been part of the The Last Time I Lied blog tour. I had previously read Final Girls by Riley Sager and I LOVED it. So of course I couldn’t wait to get my hands on this one.

My Thoughts on The Last Time I Lied by Riley Sager

Two truths and a lie-

Spoiler; they were all truths! I loved this book! From start to finish I was totally hooked.

This book was organized in such a wonderful way; the chapters were split between the present and fifteen years ago when Emma first went to the camp, and they were all told from Emma’s POV. Each timeline was so interesting and they were woven together so perfectly. I loved that as the present storyline started to get intense, we were also learning more about the first time she was at the camp in a way that really cranked up the intensity of both timelines. This really kept me flipping the pages to see what would happen next!

On the long list of things I think Riley Sager is really great at is making the reader feel like we are really in the main characters head. I really felt Emma’s heartbreak, guilt, and her constant internal turmoil over not having the answers she needed in order to heal.

I didn’t love Emma’s character at first. Early on, there were a few scenes where I found myself getting a little irritated by Emma and how, for the lack of a better word, stupid she was was being. However, as the storyline progresses and you learn more and more about what happened in her past, it all starts to make sense. There was one point of the book where I stopped reading and thought, “Oh! This all makes sense now!” I can’t wait to reread the book to see how I feel about Emma’s character now that I know the full history.

I really loved that, as a reader, I really got behind all of Emma’s theories about what had happened to the girls. The information was presented in a way that made total sense, which made each curveball even more shocking! On a quest for answers in situations, Emma was just so ready to dive wholeheartedly into each theory because it made perfect sense to her up until the last second where she got one more tiny piece of information that made the whole theory fall apart. This process made her a bit unreliable, especially in the eyes of other characters, but it also added to the suspense for the readers!

There was also a line in the beginning of the book that I highlighted thinking, oh this is definitely going to be important later… and it was. I LOVE when authors foreshadow like this!

My only complaints about this read were things that I definitely think will be cleaned up before release, so I didn’t let them affect my rating. One slight complaint was about all of the typos and grammatical errors. There weren’t a ton, but there were enough for me to feel the need to note it. My other complaint was simply the format of the mobi copy I was given. It was really out of whack.

My Favorite Passages from The Last Time I Lied

*Please note: some of these passages may have changed in the last rounds of editing before the final copy was released*

I’ve heard Randall boast to potential buyers that my surfaces are like Van Gogh’s, with paint cresting as high as an inch off the canvas. I prefer to think I paint like nature, where true smoothness is a myth, especially in the woods. The chipped ridges of tree bark. The speckle of moss on rock. Several autumns’ worth of leaves coating the ground. That’s the nature I try to capture with my scrapes and bumps and whorls of paint.

My future is quite literally a blank canvas, waiting for me to fill it.

Fifteen years. That’s how long it’s been. It feels like a lifetime ago. It also feels like yesterday.

This time around, I went overboard in the sporting goods store, snapping up items with the whirlwind of a romantic comedy heroine in a shopping montage.

One theory about the girls’ disappearance is that they walked to the main road and hitched a ride. To Canada. To New England. To unmarked graves when they climbed into the cab of a deranged trucker.

He calls to me from the open door of the arts and crafts building. Like Franny’s speech, nothing about his voice has changed. Hearing it sends more memories shooting into me. They hurt. Like a quiver of arrows to the gut.

The tension between us is like a fraying rope, pulled taut, ready to snap.

The flashlight remains off as I indulge myself with a  view of the darkened sky above I’d forgotten how different night is here. Clearer than in the city. Unmarred by light pollution and constant air traffic, the sky spreads out like a vast canvas painted midnight blue and studded with stars.

All those mistakes and humiliations following us as we march inevitably forward. There’s no ignoring them.

It’s like barbed wire that’s been stretched between us – invisible yet keenly felt whenever one of us nudges against it.

Impatience nudges my ribs and shimmies down my legs.

In that thin sliver of time, I assume that this is what death must feel like. Not a drift into deep slumber or a slow edge toward a warm light. Just a sudden halt. But then the pain arrives. A screaming, nerve-jolting pain that floods every part of me, telling me I’m still alive.

Having the truth revealed means you can finally start to unburden yourself of it.

My Final Thoughts on The Last Time I Lied

I cannot wait to snag this one in print so I can give it another read! What an intense story! I loved how suspenseful it was, especially toward the end!

Riley Sager is the pseudonym of a former journalist, editor and graphic designer who previously published mysteries under his real name. 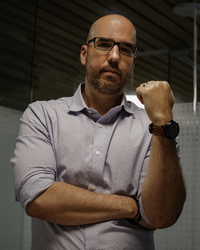 Now a full-time author, Riley’s first thriller, FINAL GIRLS, became a national and international bestseller and was called “the first great thriller of 2017” by Stephen King. Translation rights have been sold in more than two dozen countries and a film version is being developed by Universal Pictures.

Riley’s next book, THE LAST TIME I LIED, will be published in July. It was inspired by the classic novel and film “Picnic at Hanging Rock” and one horrible week Riley spent at summer camp when he was ten.

A native of Pennsylvania, Riley now lives in Princeton, New Jersey. When he’s not working on his next novel, he enjoys reading, cooking and going to the movies as much as possible. His favorite film is “Rear Window.” Or maybe “Jaws.” But probably, if he’s being honest, “Mary Poppins.”

More Information
To follow more stops on this tour, check out the Tour Schedule here.

And to snag your copy of the book, check out these links for visit your local indie book shop:

Shout out to Fantastic Flying Book Club giving me the opportunity to participate in the tour and many thanks to Dutton for my ARC.

Thanks for reading!
Have you read any great thrillers lately? I’d love to hear about them in the comments below!